There are moments from childhood that are, for one reason or other, seared in one’s memory bank.

There is one of me — almost five years old, shrieking in glee in front of our B&W Zenith television because a man had finally landed on the moon. Though the image on the television was grainy, I remember standing up and kissing the TV set, eager to catch a glimpse of Neil Armstrong. “A small step by man, a giant leap for mankind.” After Apollo 11 I became a huge Armstrong fan after that, and often dreamed of one day meeting a real life astronaut.

When my good friend Liza told me to watch “The First Man” because it was a film about grief, I sat up and did research on my childhood hero. Before this film, I never knew that Armstrong and his wife Janet had lost their 2-year old daughter Karen, in 1961. Karen Armstrong was being treated for a rare brain tumor, but it was complications from pneumonia that caused her death.

Loss and Neil Armstrong, and Ryan Gosling as Neil Armstrong were more than enough reasons to clear the schedule and go off to the cinemas.

The film is so much more than an action packed film about the US space program. It goes far beyond thDirected by David Chazelle who teamed up with Gosling for “La-La Land” you can imagine how engaging the film is over-all, and how poignant (without ever going overboard) some of the critical scenes in the film are.

Gosling and Claire Foy (of The Crown) as Janet Armstrong turn in such memorable performances that almost guarantee an Oscar nomination. Gosling’s performance as a bereaved father who grapples with the landscape of emotions is sterling.

It’s quite difficult to get me to cry at the movies, but this one, perhaps owing to the subject matter, really hit me in the gut, and in the heart. I have seen many men grieve and weep in the sacred space of my practice as grief coach, and Gosling’s portrayal is spot on. How focused and competent he is as an engineer and astronaut, but oh how he stumbles grapples with containing and expressing his feelings in the world of emotions.

“The First Man” is a brilliant tribute to all the lives that were lost in pursuit of the American dream to land the first man on the moon. Through powerful storytelling, it manages to convey how life-changing loss can be on the individual and on the family. Among the many gifts that grief brings is that it can provide us the fuel to focus and see a dream through; and how, during the highest and lowest points of one’s life, the losses that one goes through is revisited. Loss, as Armstrong’s life shows, when channeled positively, it is the potent force which inspires the bereaved to keep moving forward. 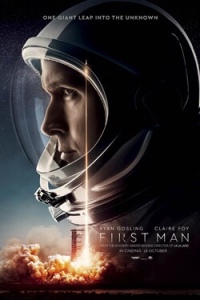 Let me know what you think…