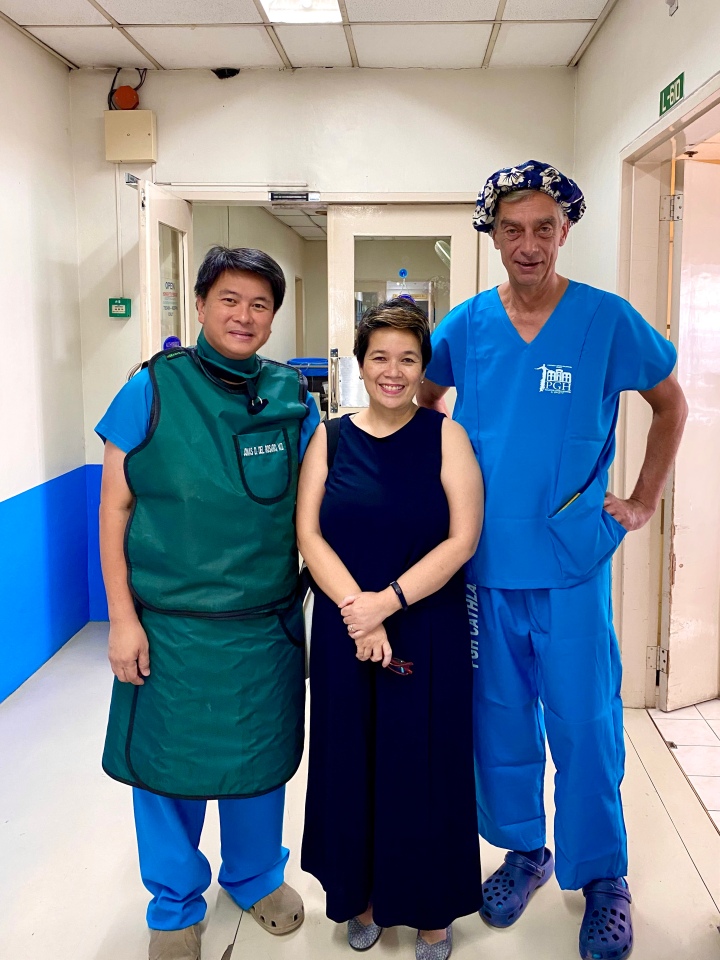 February always reminds me of you. First of all, it’s your birth month. Secondly, it’s the month of hearts, that very precious organ responsible for life and death. The one that beats wildly in moments of joy, and in moments of sadness or fear.

This month you would have been 26 years old. Imagine that. A young man. Well, I have a love story to tell you. I always like to say that you never know where loss will take you. This morning it took me back to the halls of the Philippine General Hospital, and into the control room of the cardiac catheterization lab. As you know, your Tito Jonas and I have been working together since 2018 on Project 20@20 — an on-going project whose goal is to repair little broken hearts.

Today, at the PGH through the generosity of the kind hearts who gave to Project 20@20, ten more little broken hearts born with the disease exactly like the one you had, were repaired through a novel procedure, one that wasn’t yet available during your time. Over the last three days, under the guidance of interventional pediatric cardiologist Dr. Oliver Stumper, who flew in from the UK, Tito Jonas and his team of young and brilliant interventional pediatric cardiologists put their heads, hearts and spirits together to heal these little hearts.

According to Tito Jonas, Dr. Stumper is an expert in a procedure called Stenting of the Right Venticular Outflow Tract (RVOT) in Tetralogy of Fallot (TOF). It is a palliative non surgical heart procedure thru cardiac catheterization to improve the oxygenation of these cyanotic or “blue” kids w TOF. Before the procedure, all these 10 babies and children were so blue, they had great difficulty moving and breathing and their oxygen levels bordered between 50-60% only.

Tito Jonas said that the children who were chosen for the procedure are those who are unrepaired and have been suffering for quite sometime. He said, “They are not good candidates for total correction, because of various reasons like small pulmonary arteries, some with other congenital anomalies — imperforate anus, omphalocoele, etc

Some have been refused by diff hospitals being high risk/inoperable.”

But over the last three days, by God’s grace, and the generosity of time and talent given by these doctors, mentored by Dr. Stumper, we we were able to give them, and their parents back their hope. Hope that they had perhaps lost or given up along the way.

What greater love is there than to be able to give hope and a better quality of life for these children?

I saw them in their room today, no longer blue, the color returning to their cheeks, the light reflecting once more in their eyes. The babies were in a much better and happier disposition, and one mother told us that her son’s question upon waking was, “Makaktakbo na po ba ako?”

Today, I understood better why we only had you for four short but full years. Because in the years after your passing, our Father, in His wisdom and love would orchestrate how people’s paths would meet, and kind-hearted and generous souls would come together so that children with broken hearts would be given a better shot at life.

The original intent of Project 20@20 was to provide open heart surgery with a child with TOF. But Tito Jonas had a much better idea and from 1, we have so far repaired 60 hearts now. The last 10 being children with TOF, the congenital heart disease that you were born with.

Before I left the PGH, I went to visit Ward 16 to take a look at the mural we painted 15 years ago. And there you were, up on the wall in the little red airplane. Thank you for continuing to inspire me, Migs. Your heart lives on now in 60 other little hearts. Thank you to our Father above all, for carrying us through and bringing all these wonderful people together.

There are no words to capture the pain of losing a child. In the years that follow, you simply put one foot ahead of the other, surrender your pain, move forward and follow God’s lead. We run to Him for comfort whenever it gets unbearable, and always, the comfort is there. The same comfort we offer to others who walk the same path we were once on. Twenty plus years have shown me that between loss and forever is a love so strong and so great it reaches down from heaven, enables us to carry on, and help so many others until it’s time for us to meet again. ❤️ #amazingrace2020

Let me know what you think…